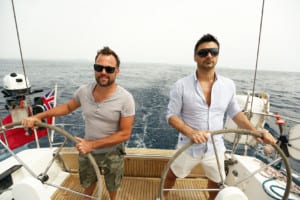 From leisure helicopters and Lamborghinis to Louis Vuitton leather goods and luxury yachts, Channel 4’s Posh Pawn elevates the concept of pawnbroking to a whole new level.  With two successful series already on film, the team has signed on for another year of giving viewers a glimpse at the hidden world of high-end pawnbroking.

Want to know more? Read on for a sneak peek at what’s in store for episode one of the latest Posh Pawn season.

James and Steve cruise around Palma

Pawnbroking can be a tough gig, and the crew have earned the right to relax and unwind. Viewers will be green with envy as James and Steve cruise around idyllic Palma in a luxury sailboat.

The world of luxury leather goods can be seriously lucrative. Thankfully, the Posh Pawn team has armed themselves with on-trend individuals who can spot quality from a mile away. Episode one showcases some gorgeous Hermès and Louis Vuitton handbags that will have fashionistas swooning.

Music memorabilia generates some crazy cash, especially when it’s associated with what’s widely regarded as the biggest Britpop band of all time. When Lawrence and Angela get their hands on an original Oasis guitar, they’re suitably excited! And a visit from Britpop expert Rob is the icing on the cake for this pair of Oasis fans…

Diamonds truly are a girl’s best friend, so when Italian client Herbert brings in a dazzling bracelet Alicja is smitten. The piece is stunning and she decides that it’s worthy of a visit to diamond specialist, Ian Towning.

Prestige Pawnbrokers is growing and with this comes the need to expand the premises. Episode one sees James move into his very own office as part of his plans to take the business to new heights. Watch this space as season three will cover the transition, and is sure to feature some exciting new developments for the Posh Pawn team.

So far season three of Posh Pawn is shaping up to be full of sensationally high-end deals, and we’ve only seen snippets of episode one! As August rolls on, be sure to catch all of the action on Channel 4.