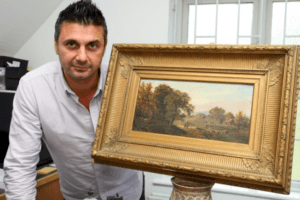 As managing director of Prestige Pawnbrokers, James Constantinou oversees one of the UK’s most coveted secured loans providers. So how did he go from small-time property developer, to celebrity pawn broker lighting up TV screens across the globe? Read on as we delve into how James got started in the industry, what drives the business to unsurpassed success and how he’s definitively reinvented the way the world views pawn.

James is a self-confessed serial entrepreneur and has spent his career dabbling in a plethora of different areas. From vintage classic cars and property development to corporate sales and marketing, he’s developed a well-rounded set of skills that have turned him into a fierce businessman.

As an age-old practice, pawnbroking calls for a stack of different skills, from charming customers to spotting counterfeit goods. For James, high-end pawnbroking was the perfect opportunity to exercise his trading skills, while simultaneously indulging his passion for all things luxurious.

James threw open the doors of Prestige Pawnbrokers in 2009, and hasn’t looked back since. Today he operates our two shops located in Richmond and Weybridge. Regular viewers of the show will know the business has been wildly successful and James credits this to his amazing team, and his willingness to say yes when others would say no. This bold search for success has led to the conquering of new heights. What’s James’ personal mantra? He always says, “I am a strong believer that to succeed in business you should have a hunger for gain, as opposed to a fear of loss.”

So what sorts of deals have graced the Prestige Pawnbrokers premises? James’ absolute favourites include a Ferrari Daytona worth £250,000, an art collection with a £1 million price tag, and rare literature that features in the Queen’s Windsor library.

Soon enough, Prestige Pawnbrokers caught the attention of the press, with James featuring in various articles and TV appearances. Thanks to dazzling deals involving helicopters, Ferraris, mini-submarines and more, he was approached by Channel 4 to feature in the reality show, Posh Pawn. The documentary follows the weird and wonderful assets that Prestige Pawnbrokers encounters on a daily basis, and has gone on to become one of the channel’s biggest hits. Episodes are broadcast across the globe and we’ve already signed on for a third season. Catch James on Channel 4 tomorrow at 8pm!