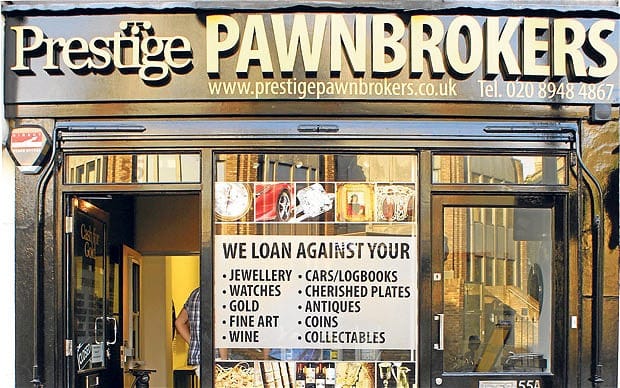 How much will I get for the 1983 Mouton Cadet I found in my grandmother’s house? And can I sell two bottles of old ruby port that I found at the back of the garage? These are questions I am often asked. The answers are: nothing, and not unless you find a sucker on eBay.
But if you have fine wine that has been properly stored, then it has never been easier to turn it into cash. This used to mean putting in a discreet call to your wine merchant – now it either means getting online or getting on to the pawnbroker.
Yes – the pawnbroker, now moving into Château Cheval Blanc and Côte d’Or as more people in need of swift cash rootle through their cellar records and ask to secure loans against what you might call their liquid assets.
“We’ve seen quite a lot of it in the past three years or so,” says Rob Davies of the National Pawnbrokers Association. “Post-2008, there are a lot of people who are asset-rich but cash-poor. As the banks have made more stringent demands on lending they find they can’t get finance through the usual channels, so there’s an increasing demand to borrow against wine, and niche pawnbrokers have popped up to service it.”
One of those is Prestige Pawnbrokers, whose headquarters are in Weybridge, Surrey, and who have opened a new office in Richmond and Manchester.

“This area is growing – there are similar patterns as in loans offered against fine art,” says chief executive James Constantinou. “Our borrowers are savvy, passionate about the wines they’ve bought or collected … they’re often businessmen who did well pre-recession – well enough, anyway, to afford to buy good wine – and who are looking to raise capital in the short term.”

Read the full article on the Telegraph website: http://www.telegraph.co.uk/foodanddrink/wine/10273882/Liquid-assets-the-rise-of-wine-pawning.html