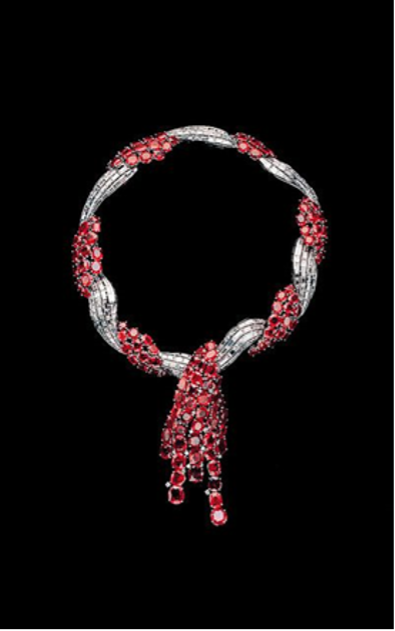 In June 1906 Alfred Van Cleef and his two cousins Charles and Julien, opened their first jewellery atelier at no. 22 Place Vendome in Paris.

After the 1900 Paris Exposition, the French capital soon became the world aristocracy’s favourite destination wanting to shop the latest creations of the fashion Maisons and ‘bijoutiers-joailliers’, famous Parisian jewellery houses.

History has always played an important role in how fashion and jewellery, accordingly, changed during the years.

The new exotic motifs and chromatic combinations encouraged many jewellers to play with different gemstones and shapes.

During the 1920s Van Cleef and Arpels creations were very much inspired by the Egyptian artifacts discovered in Tutankhamun tomb by Howard Carter in November 1922. Coloured gemstones cut as cabochons, geometric diamond patterns on the background and linear designs, reflected the changes in style, driven by Coco Chanel and her ‘Lady Garçonne’

Despite the Great Depression, the 1930s and 1940s were flourishing decades for the jewellery industry giving birth to exquisite pieces of wearable art. The necklace worn by Wallis Simpson, Duchess of Windsor, is a vivid example remaining as one of the atelier’s masterpieces. Composed of platinum alternating rows of rubies and diamond, it was originally commissioned by the duke for her 40th birthday. It sold at auction in 1987 for $2,603,308.

These years were characterised by the personality of Marlene Dietrich; Hollywood Golden Age Star, who soon became Van Cleef and Arpels’ ambassador, ordering her famous ‘Jarretière’ bracelet. Mounted in platinum, it displayed a huge cushion made of rubies and baguette cut diamonds sitting on her wrist. It is now part of an anonymous private collection.

Technically speaking, the previous decades were as a result, characterised by the most important achievement for the Maison. The ‘Serti Misterieux’ -Invisible Setting- patented in 1933 consists in mounting the gemstones one after the other creating a beautiful mosaic where the metal holding the stones remains hidden.

The years after World War II were connected to a huge need of rebirth. The recovery took place in jewellery as well. Used throughout the day, depicting positive motifs with a contemporary naturalistic inspiration, such as flowers, ribbons, animals and ballerinas, Van Cleef and Arpels excelled in the production of brooches.

The 1968 has been a remarkable year for Van Cleef and Arpels. Creating the first ‘Alhambra’ long necklace, which soon became the Maison’s emblematic icon of luck. Named after the Alhambra Palace in Granada Spain; characterized by the quatrefoil shape in its architecture, the creation of such collection was the consequence of the increasing demand in more accessible jewellery to wear daily.  Recognisable and elegantly crafted, it was originally created in yellow gold composed of 20 clover-shaped motifs. The ‘Alhambra’ made its appearance in almost every colour and variety during the years.

The popularity of rings reached their apex in the 1960s and 1970s. During this decade the French Maison added to its collection the ‘Between the fingers’ ring, being today one of the most sought-after items for fashionable women symbolising femininity, elegance and delicacy.

From its first appearance in Paris in 1906 to its latest creations, Van Cleef and Arpels played a key role in jewellery’s history adorning women from every corner of the world. 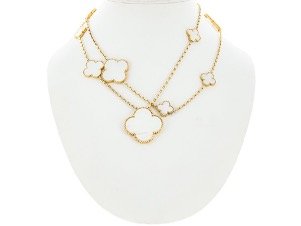 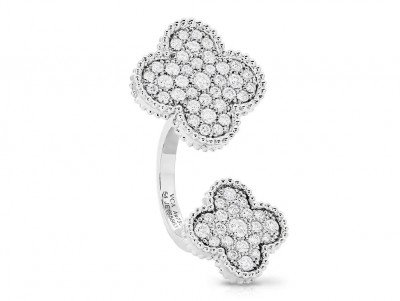